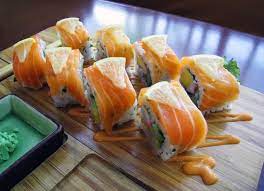 There are a number of great sushi restaurants to choose from within the Kitchener/Waterloo area, such as all – you –can –eat sushi buffets to authentic Japanese and Korean menus, and everything in between. There is definitely no shortage of sushi places to choose from if you are from this neck of the woods, that’s for sure!

First up on the list of top ten sushi restaurants is Kinkaku Izakaya. It was also ranked number one on the Trip Advisor Canada’s list of “Sushi in Kitchener”, which is a list sorted by highest rankings and includes 15 different restaurants, all within the Kitchener/Waterloo area and given an individual ranking based on a variety of different factors that include Food, Service, Value, and Atmosphere. For this restaurant in particular, they received an overall rating of 4.0 and they were also awarded #1 of 9 Japanese Restaurants in Kitchener. They scored #28 of 344 Restaurants in Kitchener. Kinkaku Izakaya received a Google Star Rating of 4.5 stars. Cuisines that are offered at this restaurant are Japanese, Sushi, and Asian. Kinkaku Izakaya itself is a tapas-style, all – you –can – eat Japanese restaurant that is committed to using fresh and high quality ingredients. So overall, this restaurant was given the best reviews and ratings across the board with a lot of 5 stars and satisfied customers. This is a highly recommended restaurant for our area with amazing food and great staff, who are not only welcoming, but who provide great service as well.

Second on the list, we have KEN Sushi House Phillip Square in Waterloo. With a slightly lower than expected ranking of number eight on the Trip Advisor list, don’t let this number fool you because this restaurant is fresh, fun, friendly, and said to be Waterloo’s #1 source for quality sushi! It was given an overall rating of 4.5 and a Google Star Rating of 4.5 stars, so it just goes to show you why this small, cozy restaurant serving the cuisines of Japanese, Sushi, and Asian alike, is listed as number two on my list of the top ten best sushi restaurants in Kitchener/Waterloo.

Next on the list is Watami Sushi, which is a Japanese eatery in Waterloo that serves sushi, sashimi, and small sharing plates along with many varieties of sake. This restaurant isn’t on the Trip Advisor list, but when searched in Google for the “Top Ten Sushi Restaurants in Kitchener/Waterloo”, this one comes up first on the list with a Google Star Rating of 4.4 stars. I think this is pretty good based on the fact that Watami just re-opened with a new name, new location, a brand new menu, renovations, and re-decoration of the entire restaurant. It really goes to show just how much restaurants with authentic Japanese cuisine are truly accounted for and needed in our city.

Fourth on our top ten best sushi restaurants list in Kitchener/Waterloo is Sakura Island Restaurant. Although this restaurant got ranked as a seven out of fifteen on the Trip Advisor list, its overall ranking is a 4.5 and its Google Star Rating is 4.3 stars. Not to mention the fact that it got rated #1 of 13 Japanese Restaurants in Waterloo and #30 of 259 Restaurants in Waterloo. Sakura Island Restaurant will take you on a delicious experience with their traditional Japanese cuisines. You will feast on the Spicy Sashimi Salad, the Yakitori, the Vegetable Tempura, and much, much more!

Suki Sushi offers a traditional yet unique dining experience, serving fresh, authentic sushi and sashimi. Their chefs serve only the freshest fish, imported daily from Japan and around the world. Suki Sushi was ranked an eleven out of fifteen on the Trip Advisor list, but its overall ranking came out relatively high with a 4.0. Its Google Star Rating is even higher than this, coming in at 4.5 stars, which is pretty phenomenal for being number eleven on the list, if you ask me! So go check it out whenever you have the opportunity!  I can assure you that you won’t be disappointed.

Sushi Stars has been famous for mixing Japanese, sushi, and B.B.Q under one roof. The fine balance between warm and cold taste will change your view of ordinary Japanese restaurants. Since 2004, they have been featuring Japanese style B.B.Q lamb, beef skewer, homemade sausage, and much more. Their menu consists of over 300 items for you to choose from, including fresh salmon sashimi, white tuna, and shrimp tempura to Japanese-style fried rice and Udon noodles. There are also a number of different desserts, such as red bean ice cream, slash, mango pudding, cheese cake, and much more. Sushi Stars was ranked very high on the Trip Advisor list, coming in at number 2, but let me explain the #6 out of 10 position on our list before jumping to any crazy conclusions here. In comparison to its competitors ahead of it, Sushi Stars only ranked a 4.0 overall and a Google Star Rating of 4.4 stars. But don’t frown anyone, it also ranked a #2 out of 9 Japanese Restaurants in Kitchener, which I think is absolutely incredible! So try Sushi Stars today!

The next best sushi restaurant on the list is Lin Hai Sushi, which ranked a four out of fifteen on the Trip Advisor list and a 4.0 rating overall. Its Google Star Rating is 4.3 stars. But the real reason I selected this restaurant to be included in our top ten list is because it was included on the site “Three Best Rated” as one of the top 3 sushi restaurants in Kitchener. Lin Hai Sushi came in at number two, with Sushi Stars taking first place and Ye’s Sushi taking third. All three restaurants faced a rigorous 50-point Inspection, which includes everything from checking reviews, ratings, reputation, history, complaints, satisfaction, trust, and cost to general excellence. The customers deserve only the best!

Yummyaki is the first Japanese all – you – can –eat restaurant in the tri-city area, with the philosophy of serving premium quality foods without the expensive price tag, in a relaxed and friendly environment. This restaurant was ranked very low on the Trip Advisor list, with a fourteen out of fifteen, which is only one away from being at the bottom of the list. But when you look further into the ratings and reviews, you will understand why this restaurant is deserving of a spot on our top ten list. Its overall ranking is a 4.0 and its Google Star Rating is 4.2 stars. But wait… I’m not finished yet…plus it was ranked #5 out of 13 Japanese in Waterloo and #1 of 259 Restaurants in Waterloo. Okay…now you may all give a round of applause to the Yummyaki Japanese Restaurant for being so outstanding everyone!

The Mandarin is known for their award-winning all – you – can –eat buffet that offers over 100 delicious dishes showcasing the best in Chinese Canadian fare. You will enjoy their extensive soup and salad bars, grill table, prime rib counter, sushi corner, and a variety of hot foods. An array of desserts, an ice cream sundae bar and frozen yogurt station offer the perfect end to the meal. The Mandarin was ranked number 10 on the Trip Advisor list, but got an overall score of 4.0. Its Google Star Rating was 4.1, which isn’t bad at all, if I must say so myself, for being this far down on the list. It was also rated #2 of 18 Chinese Restaurants in Kitchener, which is amazing! Keep up the great work Mandarin!

Last up on the list we have Tokyo Ichiban Restaurant, which serves a Japanese cuisine selection with dishes and tastes for any mood and occasion. This restaurant was not on the Trip Advisor list, but got an overall ranking of 4.0 on the site and a Google Star rating of 3.5 stars. So, before you ask why me is this restaurant on the list when it clearly has low rankings and wasn’t even on the Trip Advisor list, let me explain. Tokyo Ichiban Restaurant was rated #10 of 13 Japanese Restaurants in Waterloo. Even though Trip Advisor’s website clearly states that there aren’t enough food, service, value, or atmosphere ratings to rate the restaurant accurately, I still believe that it has earned its spot as number ten on our list.

These were my top ten picks for the best sushi restaurants in the Kitchener/Waterloo area. Bon appetit everyone!