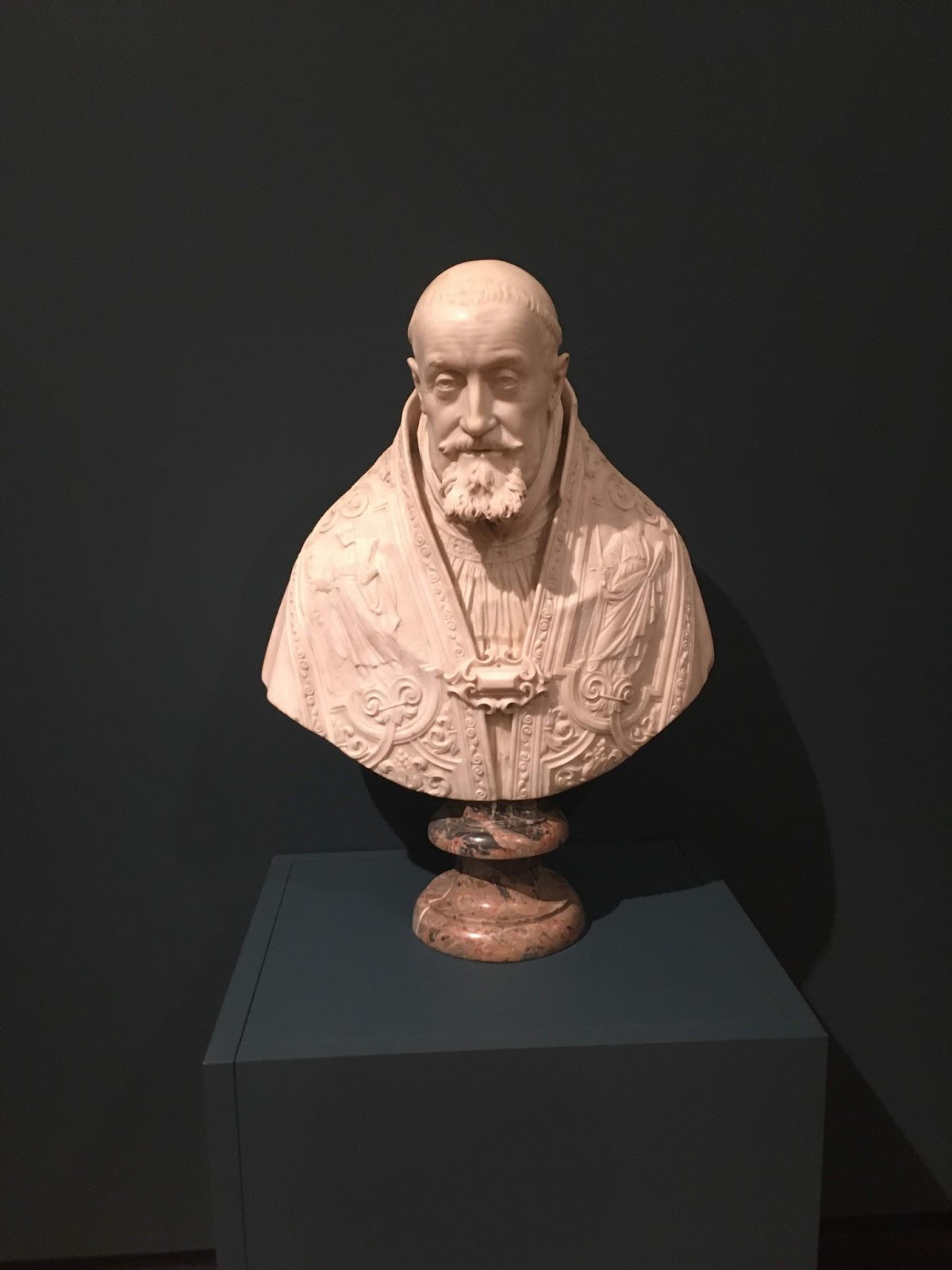 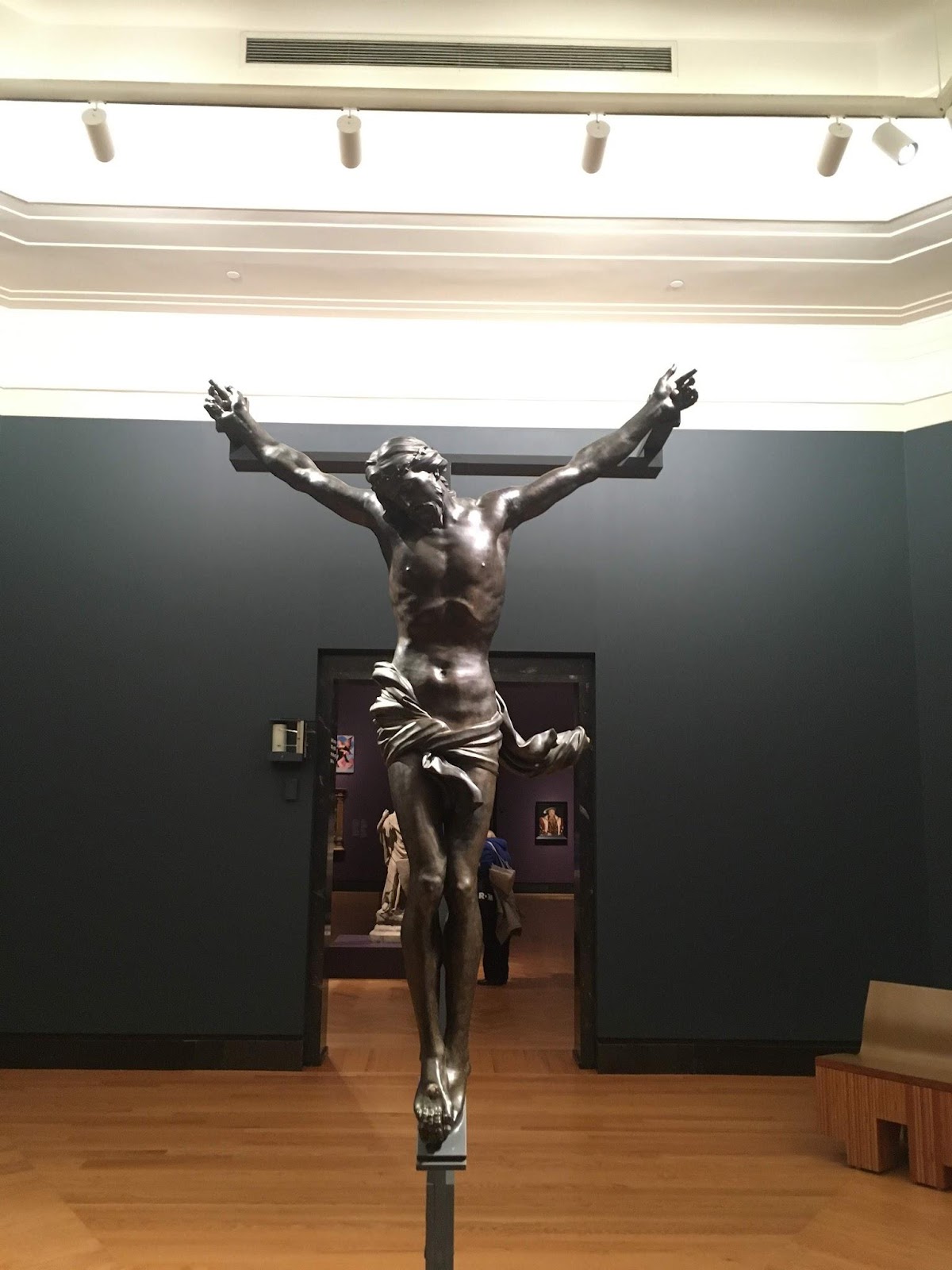 These two images share the similarity of both depicting bowed, weighted heads, denoting the responsibility of the respective individuals in their looked-up-to roles. They additionally share the similarity of dramatics, an attribute characteristic of the baroque movement, in the bust of Gregory this is reflected through the regal, majestic definition, and in Corpus this is reflected by the waining, defined sacrifice. Furthermore, both pieces exemplify Bernini’s ability to create swirling, dynamic pieces which contain details that are intended to be viewed from varied perspectives. Finally, both pieces contain similar attention to texture, adding elements of realism to both pieces primarily through realistic depiction of hair and flesh.

The two pieces however differ in their overall expression of naturalism, this may be due to one being modelled from a person the artist was viewing at the time. The bust of Gregory seems to have a more naturalistic face due to the meticulous detail within the marble of the face. Additionally, the pieces differ in their depiction of drapery, Pope Gregory’s standing, patterned drapery exudes a more rigid sense of formality depicting a formal role of a ruler whereas Christ’s drapery reflects a flowing, thick lamentation. A further difference between the pieces is the stronger presence of movement within Corpus, this is reflected by the flow of his drapery and the strain reflected in his body. This contrasts with Pope Gregory as both his expression and robes reflect stagnance.

Painting in the Netherlands

The Ferry Boat Christ at the Pool of Bethesda

Oil on Wood Oil on Canvas 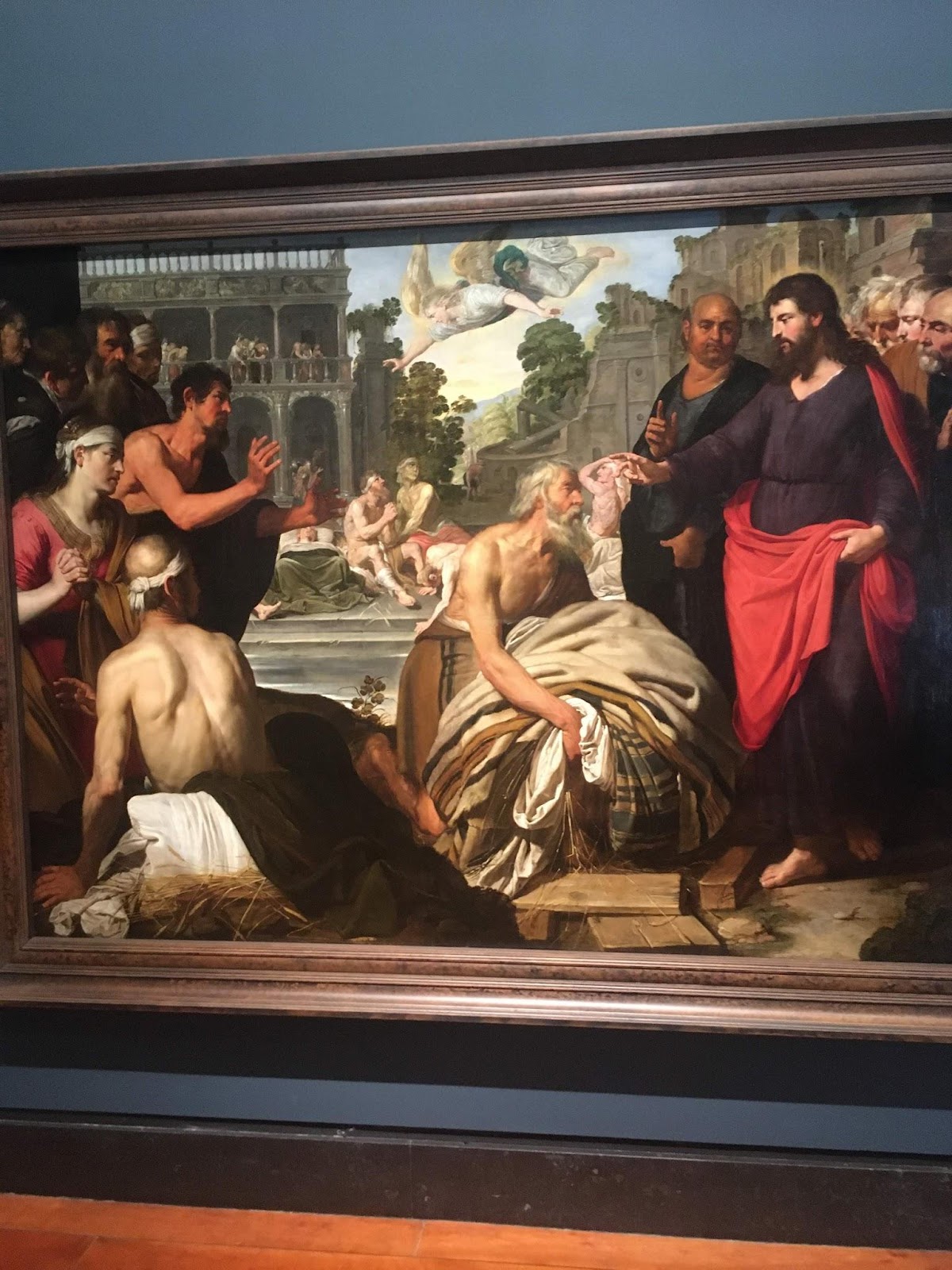 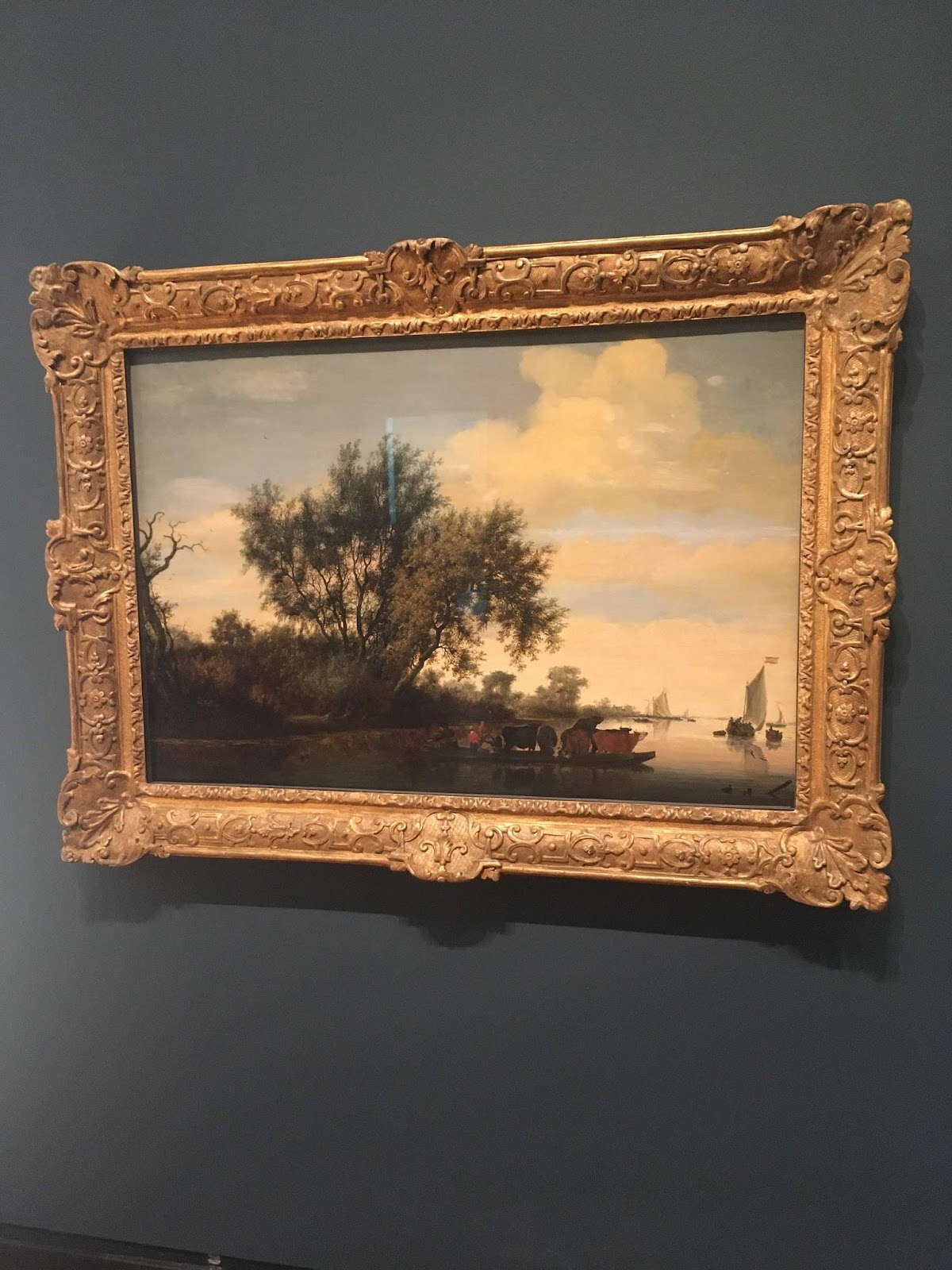 These two images share the similarity of using linear perspective to reflect differing depths of vision, in the ferry boat depth is used to reflect the distance of the titular focus, whereas in the pool of bethesda depth is used to make the immediate forefront of the image of even more notable focus. These two pieces additionally share a similarity through the use of lighting to contrast between attributes in close proximity. In the Ferry Boat this is reflected by the distant ships and sea being darkly contrasted by the closeby shoreline and inner forrest. In the pool of bethesda, this chiaroscuro-like effect is used in illuminating the principle humans in focus. These two paintings additionally share the similarity of a glossy effect that romanticizes aspects of the paintings. In the Ferry Boat this is exemplified in the soft, heavenly depiction of clouds above and behind the tree, and in the pool of bethesda this is reflected by the smooth, idealized depiction of muscles. Finally, these two images both use water in a distancing effect, in the Ferry Boat using it to distance the ferry boat from the distance sail ships and in Bethesda, the pool is used to distance the outer world from Christ’s important action.

These two paintings do however differ in their composition. The Ferry Boat is sparsely decorated, with the empty space adding to the content of the objects on the lower half of the image. Whereas the pool at bethesda has a more cluttered composition, instead using lighting to draw to focal points. Additionally, these two paintings differ in their use of colour, the pool at Bethesda utilizes colour in drawing distinctions between christ and the patrons holding clothes, furthermore colour is used in more overall vibrance in comparison to the Ferry Boat, namely through the presence of more distinct, bright colours as shown in the depiction of skin tone and the woman’s robes. Furthermore, these two paintings differ in their subject matter, this comes as a matter of importance as the Ferry Boat denotes a complete lack of christian attributes, strongly contrasting with the pool at Bethesda which not only depicts a story of christ but additionally denotes more heavenly themes (the prominence of the heavenly figure in the upper middle) and worship. Finally, the two paintings differ in their depiction of conflict, with the Ferry Boat reflecting serenity, and the pool at Bethesda reflecting potential conflict and strife.

Oil on Wood Oil on Canvas 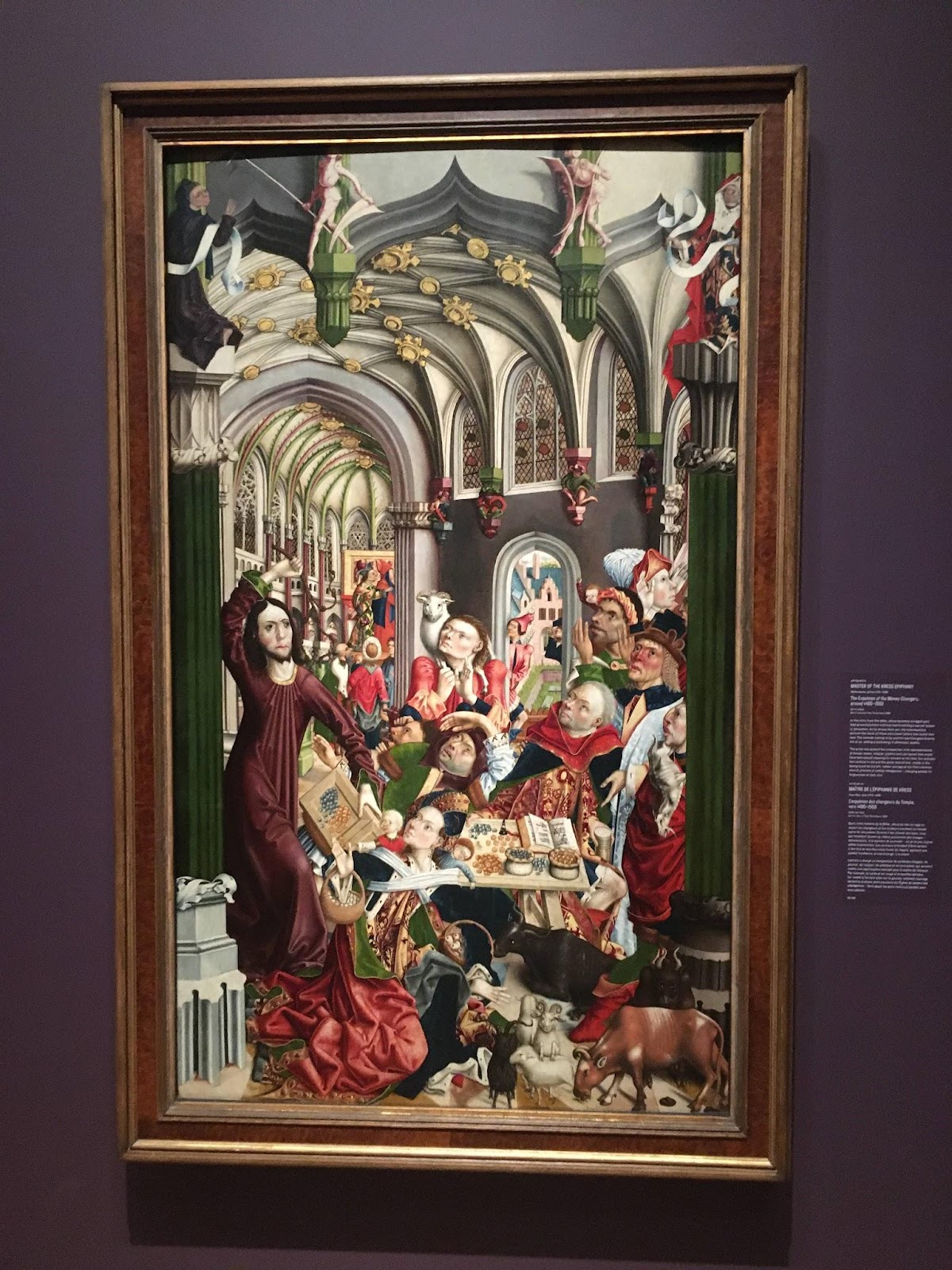 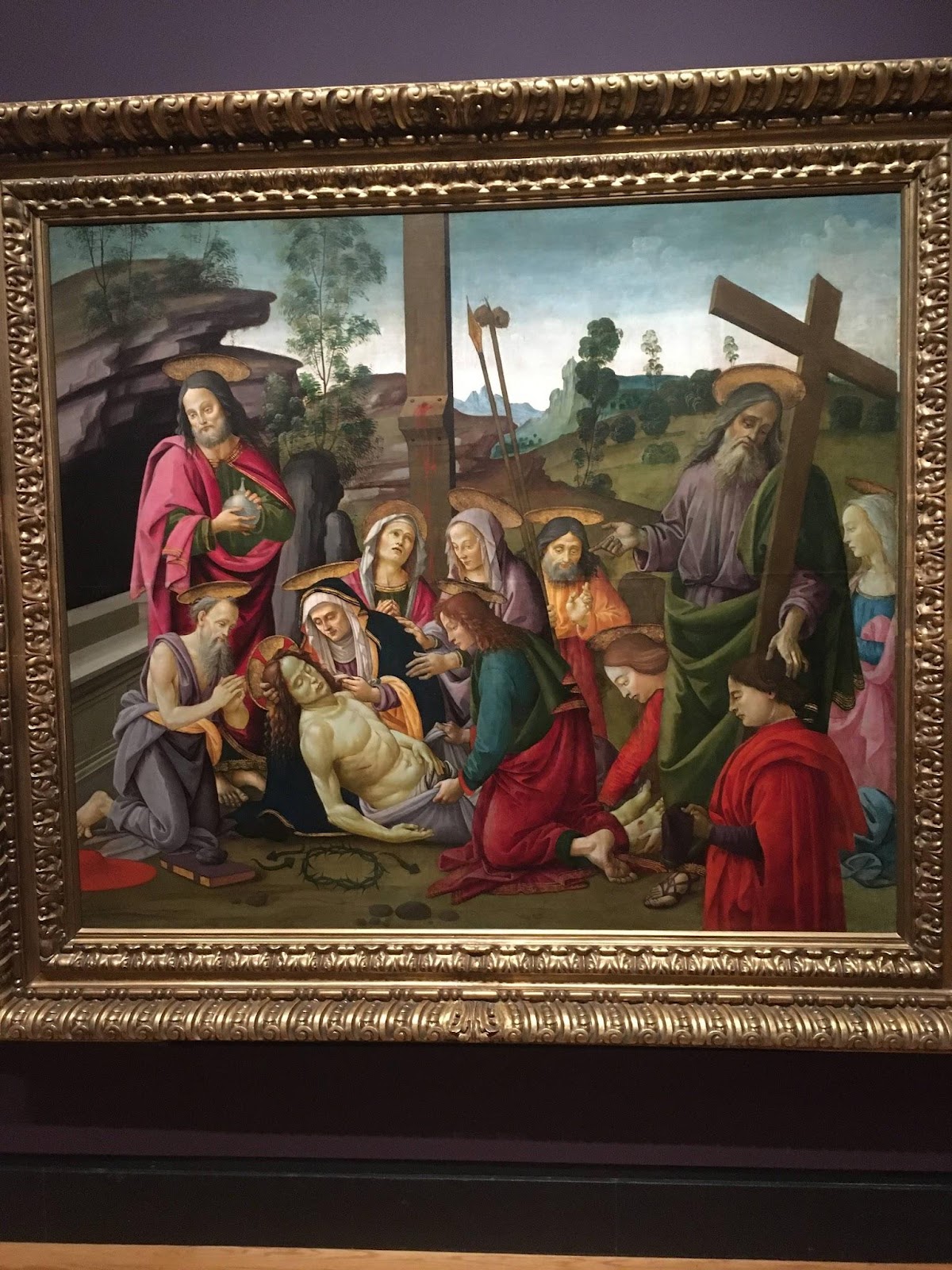 These two paintings share the similarity of depicting very similar colours, particularly in drapery, they both utilize prominent maroon and red colours in the forefront, which are laid upon a green/cream background, contrasting the two sides of the colour wheel and allowing for focus to be drawn to the drapery. Additionally, the two images share the similarity of using depth to draw prominence to jesus and the surrounding individuals. This has the effect of putting Christ at the forefront of the image, making him the focal point whilst reflecting a grander scene occuring behind him. Furthermore, these two paintings share the similarity of brightly illuminating Christ and those close to him, this is primarily reflected by the bright tones used on skin in both pictures, it allows for the faces in the image to be the primary focus of the viewer. Finally, these two images share the similarity of featuring large focus on the expression of the individuals present in the images. This is done in correlation with the use of illumination of their faces, allowing the expressions of shock and sadness to dictate the tone of the painting as they serve as primary points of focus.

These images however differ in their depiction of Christ, in “Expulsion” Christ is shown as a bold figure with a long drawn out face, whereas in “Lamentation” he is depicted as having a sunken in face with principal focus on the handsome elements of his figure and face structure. Tangentially, the two images share the difference of their depiction of human faces, “Expulsion” features a unique, almost surrealistic depiction of human faces, with faces seeming shrunken in, and noses stout. This contrasts with “Lamentation” in which human faces are depicted with a more naturalistic style. These two images additionally differ in their attention to minute detail, “Expulsion” features meticulous detail in the surroundings of the image, adding a grand, theatrical element to the painting. “Lamentation” however features background elements that in ways blend together, featuring mellow tones that do not allow their details to appear as distinct. Finally, the two images share the difference of tone within content, “Expulsion” shows a supposed moment of triumph, expressing movement and strife whereas “Lamentation” reflects its title in depicting stagnation within lamentation.

The Seine at Chatou The Storm 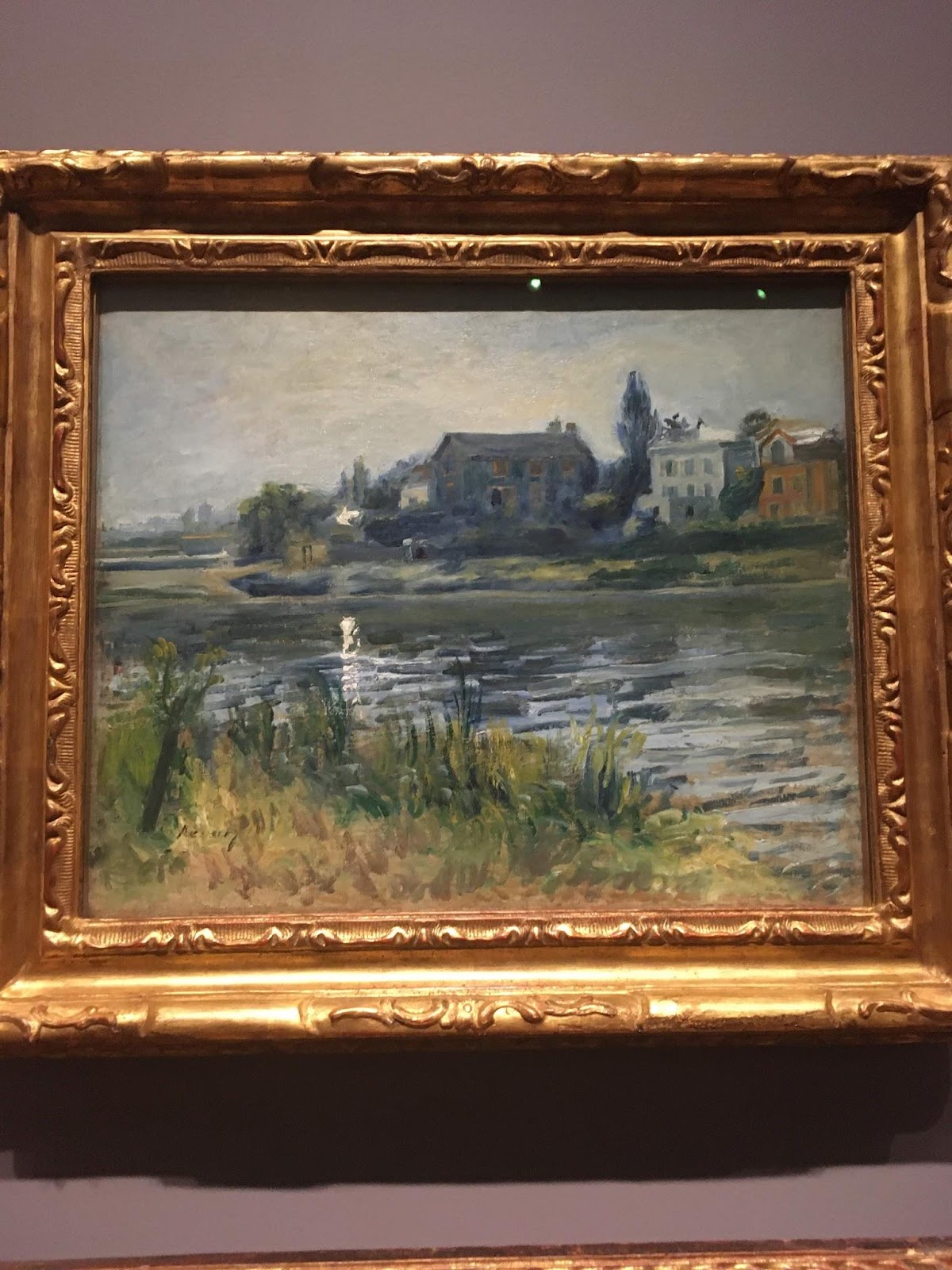 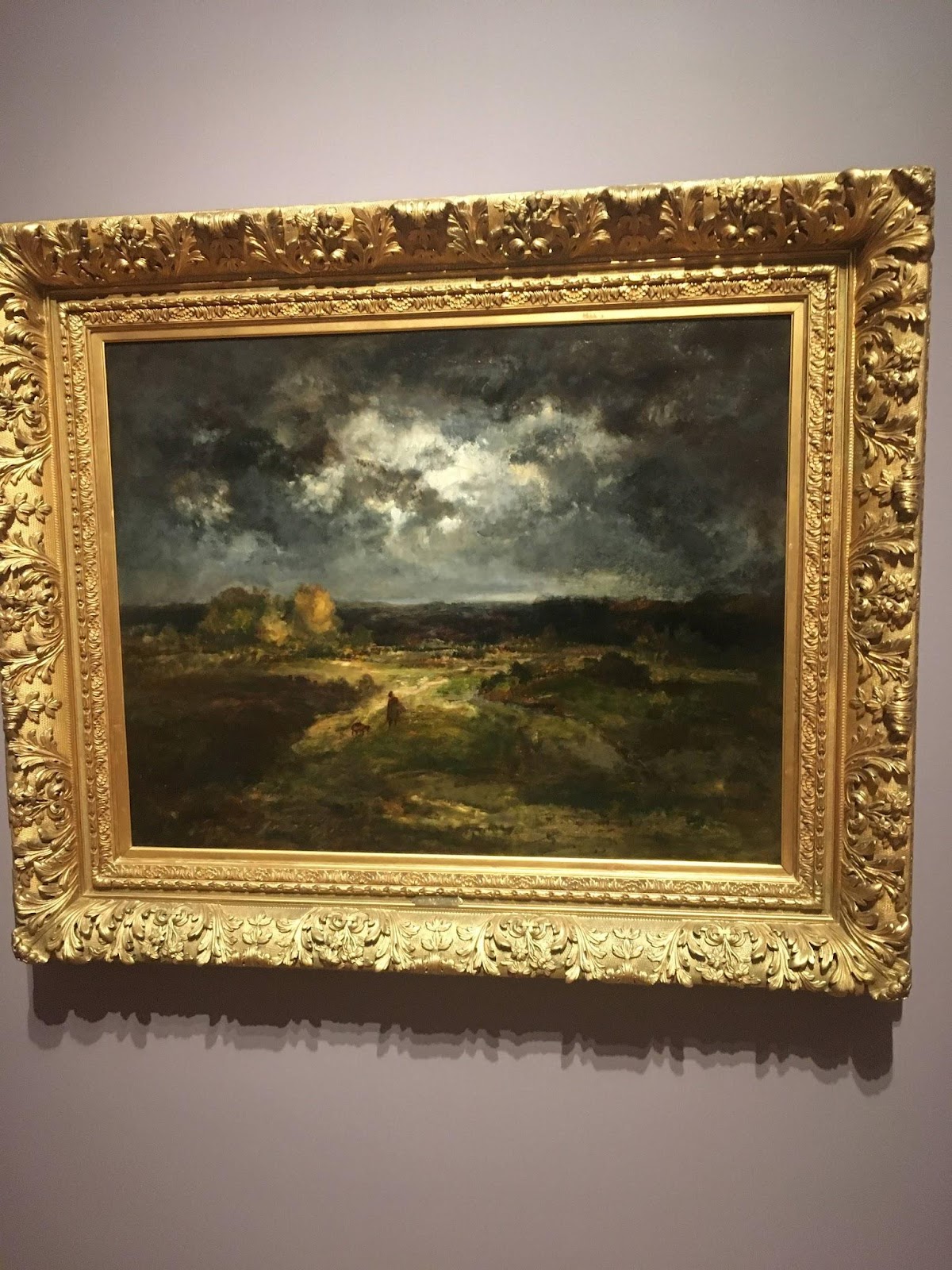 Both of these images reflect the impressionist element of small, minute strokes of paint culminating in a flowing image. In The Seine at Chatou this is reflected by the river consisting of varied spots of differing colour that flow together, similarly, in The Storm, the clouds are formed from the cumulative effort of small clusters creating a multicoloured dark cloud. Additionally, these use of clusters of small strokes of paint allows for both images to reflect accurate depictions of colour, this is shown in the contrast of light and dark in the clouds of the Storm, and in the differences in light and dark in The Seine at Chatou. Furthermore, these two paintings share a relatively open composition. It is not entirely clear to the viewer where the central point of focus is as the elements within the paintings are drawn out and stretched across a plain or body of water. Finally, these two images share the similarity of featuring non-defined distinction between attributes, this is reflected in The Seine at Chatou by the blend between the shoreline’s tall grass and the river itself. This is additionally reflected in The Storm through the blending between the rock, green grass, and dried grass on the plain.

These two images do however differ in their overall use of lighting. The Seine at Chatou although featuring dim lighting allows the lighting to stay relatively consistent through all parts of the image. This contrasts with The Storm in which lighting is used in drawing a general circle in the middle of the image that serves as the focal point. These two paintings additionally differ in their use of visual angles of perspective. The Seine at Chatou takes a relatively human perspective in which a human could be viewing the content of the image, standing at a standard height, The Storm contrasts with this with a heightened perspective looking down on the hills in front of them, but additionally able to look up at the storm coming above. Furthermore, the images appear to differ in their depiction of movement. Although both feature elements of movement (the movement of the storm), The Seine at Chatou takes on a much more fluid motion by depicting only a section of the moving river. The Storm appears to be contained within the frame of the image whereas The Seine’s river is shown flowing into and off of the frame. Finally, these two images differ in naturalism, the Seine’s depictions of grass are intentionally skewed from a realistic depiction with little definition present, whereas the Storm features much more naturalistic elements of nature, with blending being used to allow elements to become distinct enough to appear close to naturalistic.